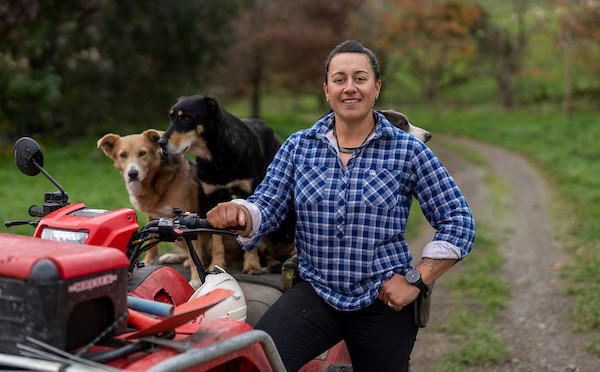 Chloe is 30 years old and currently employed as the Assistant Farm Manager for Robert and Helen Pattullo on Newstead Farm, a bull beef farm in the Puketapu district near Napier.

Chloe grew up in the Hawke’s Bay and she spent all her weekends and school holidays on her uncle’s farm, where she quickly learnt that farming was her passion. Being out on the whenua in the fresh air, working with animals and being exposed to our beautiful environment always made her feel at home on the land.

Chloe went straight into a shepherding role once she left school at the age of 16, where she learnt the art of mustering steep on the hill country with her kuri. Chloe enjoys being involved in all animal health, general and maintenance jobs. She even worked a couple years in the dairy industry which she enjoyed, but sheep and beef is her passion.

Chloe has now been at Newstead Farm for four years. With the great infrastructure and reticulated water on farm, Chloe says it makes working bulls an enjoyable job. She loves seeing them improve in weight on the 936ha (759ha effective) hill country that they are finished on.

The farm buys in 1,150 friesian bulls in late April until the end of May at an average weight of 465kg, they are rotated every four days within their 20ha blocks in permanent one ha cells on an 80 day round going down to two days shifts in the second round. They start sending bulls to the works in November with all bulls off farm by the first week of February. With this system, the farm has found they are keeping summer safe and letting the pastures recover and build up for winter rotation. The farm is going into May with an APC of 2,700kg/dm/ha. They have a small mob of breeding cows and ewes rotating around the farm also.

On Newstead Farm kaitiakitanga is something they take pride in – fencing off waterways, riparian planting and minimising sediment loss and N leaching. Chloe says it is great to be working on a farm where these practices are taken into action: looking after our whenua that we farm on.

Chloe is involved with the community and attends all Monitor Farm days and is an active member of the Ahuriri Lagoon Tributaries Catchment group.

Robert has been a huge support in furthering Chloe’s career within the industry. She has completed her Level 3 and 4 in sheep and beef with the Primary ITO apprenticeship boost, and is looking forward to starting her diploma in Primary Industries as it will further her knowledge within the primary sector. Chloe’s goal is becoming a farm manager, and to be in a position to teach rangatahi and support them into the industry.   A huge benefit for some of the farm employees is having their accommodation provided.  This has provided Chloe and her wife Makita with the opportunity to get on the property ladder. They now own three houses where they are providing warm healthy homes for families to call home in Ngati Kahungunu.