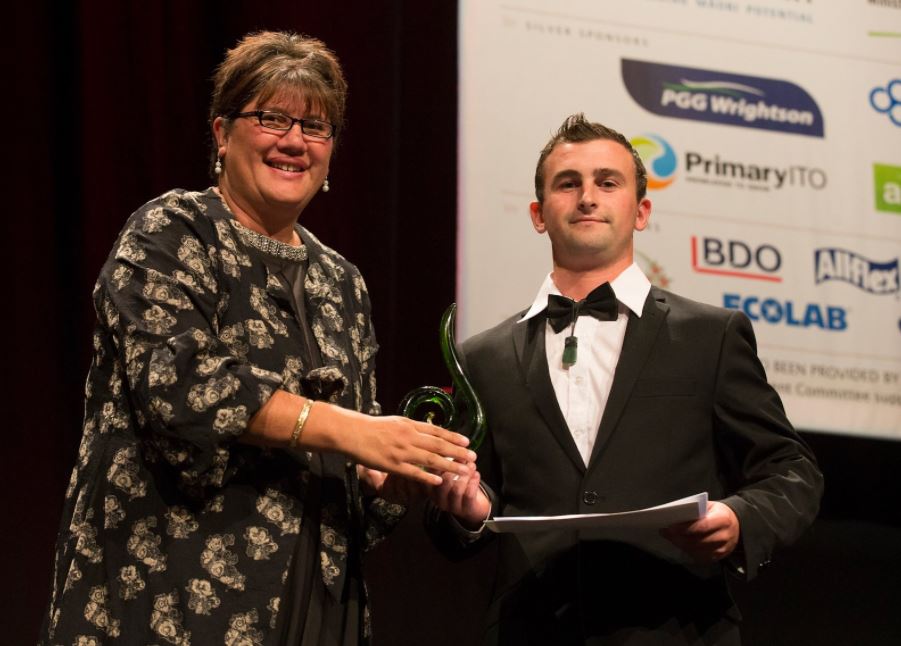 A young farmer who confesses he "got into the wrong crowd as a teenager and chose the wrong path" has been crowned the 2016 Ahuwhenua Young Māori dairy farmer of the year.

Jack Raharuhi, hailing from the Ngati Kahu, said winning a prestigious award such as the Ahuwhenua was a huge honour.

"I got into the wrong crowd as a teenager and I chose the wrong path. I left school and came to work here on the farm which I now manage. Dairy farming got me in line. I had no time to go out and get into trouble. Now I have a fiancée and two children," he said in Hamilton at the awards ceremony.

Alternating between the dairy and sheep and beef sectors, the Young Māori Farmer competition aims to celebrate leadership qualities and inspire young Māori to grow their careers to reach their full potential.

Raharuhi is from the West Coast and currently manages the 450-hectare Bassets dairy unit, a Landcorp property in Westport. He employs 5 fulltime staff to help him look after 1100 cows which are milked twice daily through most of the season.

He left Buller High School at age 15 to work on a dairy farm, and has developed a passion for training other young workers and helping them carve out viable career paths. However, the 24 year-old had no experience in dairy farming until his father organised a job for him through a friend.

After three or four years of work, Raharuhi decided to get back into study and enrolled with Primary ITO. He has now completed Level 3, 4 and 5 qualifications in dairy farming and production management. He also has several short courses in milk quality and leadership skills under his belt, and was named Primary ITO's West Coast overall trainee of the year in 2015.

"Education is a big thing these days. To get a manager's role now, qualifications are a necessity. If I can train my guys up to get to that level and know they have the certificates to back themselves up, I feel really positive that I've helped them get there."

"This win is definitely going to help me get to where I want to go. I want to be a supervisor and oversee 5000 cows or move into an advisory role down the track. I have a goal to do the best I can to ensure my whanau and I have a great quality of life," Raharuhi said.

The other two finalists were Lincoln University agriculture student Ash-Leigh Campbell from Lincoln and Harepaora Ngaheu from Te Teko, who is about to take on a new dairy farm manager role in Ruatoki, south of Whakatane.

Peter Little, lead judge of Te Puni Kokiri, who sponsor the competition, said there had been a very high standard of entrant.

"Despite the downturn dairy farmers are experiencing, there are some very committed young Māori in the dairy industry. I've got no doubt that with future leaders like Jack, Ash-Leigh and Harepaora coming through the ranks, our dairying enterprises will not only come out the other side of this, but prosper into the future," he said.